Have you ever seen a flag being raised on a flagpole? What about a crane on a construction site? Despite the obvious weight difference between a flag and a large load of steel, these are both examples of the simple machine known as the pulley. A pulley, simply put, is a wheel with a groove that you loop a rope around. The groove is important because it helps to keep the rope in place.

How do Pulleys Make Lifting Easier?

The first thing you need to know is the difference between weight and mass. Mass is the amount of stuff that something is made from or contains. Weight is the amount of force that gravity pulls on a particular mass. As we all know, the moon is way smaller than the Earth. So, by being smaller it exerts way less gravitational pull than the Earth does! If you were to instantly appear on the moon, nothing would have changed about you, but you would suddenly weigh less! Your mass doesn’t change, but your weight does. Less gravity equals less weight. While you can’t use a pulley to change something’s mass, you can use it to change the force needed to lift it!

The more wheels you have, i.e. the more times your rope changes direction, the more you can lift! Let’s break it down into some easy math. 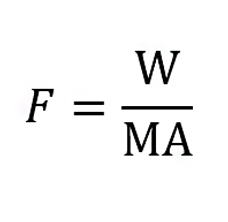 F is your force, that is, the amount of pull required to move an object. In a pulley system, F is the amount of force you need to apply to the rope to move the object at the other end.

W is the weight of your object, which is affected by your mechanical advantage, or MA. Mechanical advantage is a measurement of how much a simple machine changes a force. Figuring out the mechanical advantage is as simple as counting the number of rope sections that support whatever you are lifting (not counting the rope section that you are pulling). So, for example, say we only have one rope section. We can see with our formula that one rope section won’t reduce the amount of work required to lift the object, but it DOES help us by changing the direction of our force. Instead of pulling the load directly upward, you can use your weight (which is influenced by gravity) to pull down and lift the load. The rope runs through something called a sheave, which is part of the pulley system. It’s the rotating, grooved wheel inside the pulley, and it’s the piece that the rope fits into.

The bigger the mechanical advantage, the less force you need, but the greater the distance over which that force must be used. This is because you’re adding more length to the rope in your pulley system, which means you must pull more rope to lift your object the same distance.

A compound pulley system multiplies your mechanical advantage by having one simple pulley system acting on another. These systems use several sheaves together, but to increase the efficiency, they are arranged either above or below each other, often with a fixed point between them.

One common configuration for a compound pulley system is a Block and Tackle. This design uses a number of pulleys sharing one fixed axle at the top. This part is known as the block. The block is connected by ropes to another set of moveable pulleys at the bottom. The moveable part at the bottom is called the tackle. A block and tackle can help to cut down the weight of your load substantially.

Let’s do the math to find out exactly how much a block and tackle system can cut down the weight of your load. Okay, so let’s say you have a barrel of oil, that weighs about 172 kilograms. You decide to go with a four pulley, single sheave block, and tackle set-up. This means that your mechanical advantage is 4. So, 172 divided by 4 is 43 kilograms! That means that you need to apply 43 kilograms of force to the end of your line in order to move the load.

No matter your need, ohcanadasupply.ca has you covered. Whether you want a fixed block pulley, a fixed pulley with some sway, a pulley that can swivel on a dime, or a pulley that can be moved with ease—we’ve got it all! We even have both single and double-sheave pulleys to suit any system configuration. Not to mention many different types of rope, wire, and cable!

So, if you have any other questions, or need help figuring out the best way to lift your load, contact us here. Also, don’t forget to subscribe to our mailing list so you can stay up to date with things happening here at ohcanadasupply.ca!