The Difference Between Spring, Distilled, and Reverse Osmosis Water

Arctic Chiller produces three main lines of water: Spring, Distilled, and Reverse Osmosis. But what is the difference between distilled and reverse osmosis water? Is Distilled water safe to drink? Why does water have Fluoride in it? What is reverse osmosis water used for? We will get to your questions shortly, but to start off, let's look more closely at spring water.

In Canada, for water to be deemed spring water, it has to be obtained from an underground source. This water also has to be relatively unchanged from that underground source. A few exceptions to this rule are the addition of carbon dioxide, fluoride, and ozone. If these ingredients are added it has to be stated on the label, but only if they are in a higher concentration than what was originally in the water. Springwater can sometimes be referred to as mineralized if it has a slightly higher mineral content as long as it’s still from an underground source. So, if you see that on a label, that’s what it means!

Arctic Chiller Spring water is Ozonated. This means ozone has been added to the water because the ozone breaks down into oxygen which makes the water smell better, taste better, and deters the production of harmful bacteria’s in the plastic bottles. If you check out the back label of Arctic Chiller’s Springwater, you can find the number of dissolved minerals in the water (199mg/L) as well as the fluoride content (<0.1 mg/L). Compared to distilled and reverse osmosis water, spring water has low fluoride content and high mineralized content. This difference is because it is straight from the earth which has a naturally low fluoride content, but a high dissolved mineral content. Springwater is mostly used for drinking purposes, this is because the dissolved minerals picked up in the spring water from the earth (like calcium, magnesium, and iron) are necessary for our daily bodily functions, and are one of the few places we can get these badly needed minerals!

Although there are many federal regulations surrounding the selling of bottled spring water, too many to get into here, one of the more interesting ones states that you cannot depict a setting on your label that is different than the location of your underground water source. This means that if you are obtaining your spring water from an underground source in the prairies, but your label has a picture of the Rocky Mountains on it, it is deemed false advertising and is then subject to fines from the Canadian Food Inspection Agency. The source also has to be clearly displayed on your packing, so the source for Arctic Chiller’s water is Kootenay Plain’s Alberta!

Did you know? Fluoride is something that is very common in our tap water as it is added to promote proper dental hygiene by controlling cavities. So, if people want to avoid highly fluorinated water they will often drink bottled spring water.

One of the other water products offered from Arctic Chiller is their Reverse Osmosis water.

Despite its very scientific name, reverse osmosis is not all that complicated. RO is a method of water demineralization that involves using a barrier to remove contaminants from spring or tap water. Water is forced through a barrier with holes so tiny that bigger particles have a hard time getting through, therefore producing what is mostly water. This water purification process is what is commonly used in municipal water purification systems, as it is an effective and quick way to purify large quantities of water.

If you look at the bottle of Arctic Chiller RO water, you’ll see that it is labeled as Demineralized Water. Demineralized water is a blanket term to describe water that has contaminants removed but was not distilled. It also is Ozonated, which we know helps the water last longer on the shelves, and its mineral content is 5mg/L while its fluoride content is less than 5 ppm (parts per million) or 5mg/L. RO water is commonly used for industrial applications in place of pure water because it is not so costly to produce compared to other demineralization methods, such as distillation.

Did you know? The World Health Organization advises against drinking RO water, as the lack of dissolved minerals in the water actually causes the water to strip these minerals from your body, depleting your body of valuable minerals it needs to function.

Distilled water refers to tap or spring water that has undergone the process of evaporation and condensation. Whereas other methods remove contaminants from the water, distillation removes water from the contaminants. To obtain distilled water, one must boil the water then the resulting steam is condensed into a clean container. This water is the gold standard of pure. It is a praised method of demineralization because the results are always repeatable and reliable. 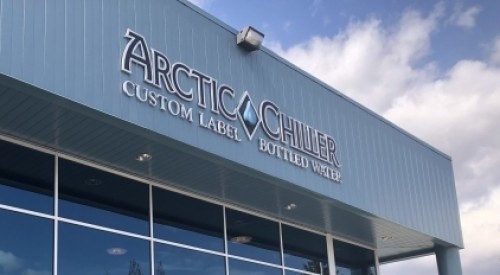 If you look at an Arctic Chiller bottle of distilled water, you can see that it is Ozonated, which we know helps the preservation of the water. If you check out the mineral and fluoride content you can see that it is by far the purest water from Arctic Chill. With a mineral content of 1ppm or 1mg/L and fluoride content of less than .04 ppm or .04 mg/L, it is purer than any other offering from Arctic Chiller.

You would use distilled water for various industrial applications where an excess of contaminants would not be acceptable, for instance, to top up lead-acid batteries. Also, distilled water is preferred in automotive cooling systems for the lack of minerals left behind after evaporation.

So, let's do a recap! Arctic Chiller sells three kinds of water fit for a wide range of applications, Spring, Distilled, and Reverse Osmosis. Springwater is sourced from natural reservoirs on the earth and is mainly used for drinking. Reverse osmosis water is demineralized, relatively pure, and not as costly as other purifying methods. Distilled water is demineralized through the process of evaporation and is the gold standard of purity where water is concerned. It is commonly used in industrial applications, like toping up lead-acid batteries and cooling systems. It’s clear that for any industrial application, Artic Chiller has got your water needs covered!

At ohcanadasupply.ca we pride ourselves on being your Canadian choice for industrial supplies online. If you have any questions feel free to contact ushere. And make sure to subscribe to our email list so you can keep up to date with things going on here at ohcanadasupply.ca!