What are Gabriel Shock Absorbers?

Shock absorbers help to combat the irregularities of the road. Historically speaking, shock absorbers were spring-based. But, an issue that arose was the large variation in weight between lightly loaded and fully loaded vehicles. When heavily loaded the springs could bottom out and become damaged. Realizing that the spring and vehicle combination was too bouncy, the shock absorbers we now know today was eventually developed.

What are Shock Absorbers? 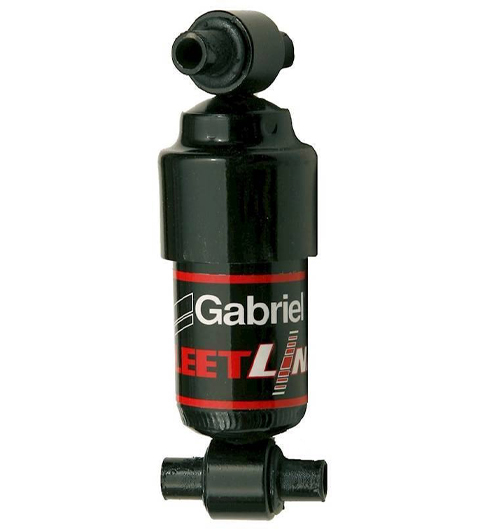 Shock absorbers are a component of a truck’s suspension system, which is made up of its axles, leaf springs, bellows, torque rods, control arms, and shocks. The shock’s purpose within the system is to soften the bumps on the road, reducing the excessive feedback the driver receives. If we want to get really technical and make our Physics teachers proud, they’re designed to capture the kinetic energy received from the irregularities of the road and then release it as thermal energy. As the first law of thermodynamics states, “energy cannot be created or destroyed”. So, the shock absorber converts energy into heat, which leads to a smoother ride. It does this by using a piston that moves with the impact of the road. That impact then forces oil through the valves located within the piston. The speed the oil flows through the valves controls the amount of resistance and makes the ride that much gentler. There are other features of a shock absorber such as the size of the bore, the type of fluid used, and the medium that is used like gas; which all affect how a shock absorbs impacts!

When to Replace Shock Absorbers:

First things first, how do you know when to replace your current shock absorbers? Well, Gabriel recommends replacing them every 80,000km, but when it comes to larger fleets that are constantly on the road racking up kilometers, their shocks may need to be serviced sooner than what is recommended. So, to be safe, incorporate a routine visual inspection of the shocks for any leaks or damages.

An obvious way to tell that your shocks need to be looked at is if you receive excessive feedback from the road. Normally if the shocks are doing their job properly, they will absorb the impact and the feedback that the driver receives from the road will be far less noticeable. For larger trucks and trailers that aren’t as aerodynamic, you might also notice excessive swaying while driving and leaning when making sharp turns. This is because the shocks have lost their shock-absorbing ability over time, compromising their ability to respond to weight transfer, which makes it more difficult for the driver to control the vehicle. Another important sign to look for is uneven or premature tread wear. This is caused by the shock's inability to control the suspension which causes excessive bouncing leading to tread wear.

The next sign to look for is especially important during the winter season. Ice, snow, grit, and debris can cause damage to the piston rod, leading to damage within the piston seal. When the seal is broken, fluid may leak and compromise the shock's ability to control the vehicle, because it doesn’t have the proper amount of oil to disperse the heat properly. When this happens, you’ll notice a thick coat of grime mixed with the leaked oil, compared to one in good condition with minor dirt and debris. If you observe this, you’ll want to take it in to be inspected immediately because a damaged seal can cause further damage to the shock absorber, and in some cases damage to the truck’s suspension. There are numerous other signs but these are the most common when it comes to shock absorbers that need to be replaced. It is important not to ignore these warnings, as broken shocks can have some dangerous consequences.

What Causes Shock Wear and Tear?

A lot of it has to do with heat and cavitation, the constant heating and cooling from everyday use will eventually wear the oil out causing it to lose its viscosity, and over time decreasing the shocks dampening ability. Cavitation occurs when the shock absorbs a large amount of impact which causes the piston to extend too quickly for the oil to move into the pressure chamber. This creates a pocket of air, or a vacuum, of low pressure which is where the problem occurs. The vacuum is filled with air that was previously dissolved in the oil. On the return stroke, this air is crushed quickly creating a shockwave that damages the shock internals like its seals and gaskets. This is why driving over excessively bumpy roads reduces the life of the shocks, in addition to general wear and tear. When this happens, you’ll start to notice signs that the shocks need to be replaced.

About Our Gabriel Shock Absorbers:

To start off, shocks are organized by the weight of the truck they’re intended to be used for, the types of suspension the truck has, and the truck's intended use. We carry four lines of Gabriel shock absorbers here at ohcanadasupply.ca designed specifically for trucks, trailers, and buses.

For lightweight trucks with heavy front suspensions that are going to be primarily used for delivery, the 83000 series with a 1-3/8” bore, would be the proper choice. The size of the bore is important to a shock absorber's functionality because it is the shell hat that protects the piston, which affects the strength and durability of the shock. This series features the thinnest bore but is still capable of withstanding large amounts of impact making the shocks perfect for lighter trucks. So, whether you’re driving through a busy downtown or bumping along a gravel road in the country, you can trust in the durability of this small compact series.

The next series is the 85700 series which is designed for heavy trucks and buses. This series features a patented triple lip nitrile rod which provides extra protection and fluid retention, compared to others in the industry that only use nylon braided seals. Since the shocks are going to be used for trucks and buses, you’ll want the strongest seal possible. The fluids used in this series are custom blended with a high-temperature resistance to withstand the extreme pressures that would normally break down standard shock absorber oils. All this translates to more time on the road and less time in the shop.

For trucks and trailers with low friction suspensions weighing between 19,500lbs and 33,000lbs, the 850 series, 851 series, 853 series, and 856 series are going to be your best choice. With a thicker 1-5/8” bore and a larger design, this series has more durability and fluid capacity to keep up with heavier payloads and harsh road conditions.

Lastly, we carry the 89000 GAS SLX series. These shock absorbers are designed for long-life commercial trucks weighing 26,000lbs to 33,000lbs. This series uses gas contained in separate chambers in conjunction with oil. The gas aids the oil to withstand large amounts of impact by providing an extra cushion. When the piston forces oils through the valves, it is slowed by the gas, providing extra shock-absorbing capabilities, which is why they are meant for heavy commercial trucks. The addition of gas takes the pressure off of the oil to absorb the majority of the impact, thus reduces the effect of cavitation, leading to a longer lifespan of the shock. There are also three adjustable settings of how firm the shocks can be set. Regular, Firm, and Extra Firm; depending on the intended use of the truck, you will want to choose the setting accordingly. Since gas shocks are more recent, older vehicles aren’t designed to work well with Gas Shocks, so check with your mechanic to see which shocks are right for you!

It is important to note, even though cavitation isn’t as much of an issue with gas shocks, an effect known as aeration can still occur. Aeration causes the fluid to foam when the oil and gas mix in the gas reservoir causing the oil to lose its viscous nature. This happens over a longer period of time, and is part of the standard wear and tear for gas shocks.

That does it for shock absorbers, hopefully, you were able to “absorb” all of that information. But if you have any questions feel free to contact us here. And make sure to subscribe to our email list so you can keep up to date with our latest offers, flyers, new products, and giveaways here at ohcanadasupply.ca!